So far this has been a pretty quiet tropical cyclone season this year, that is, until Hurricane Harvey slammed into Houston Texas and caused widespread flooding and devastation. The need to be prepared is evident now more than ever. However, there is a difference between being prepared and unnecessary panic. Unnecessary panic is very dangerous and could potentially cost lives. With all the fake news spreading across the internet, fake news about tropical cyclones has seen a spike this year like no other year before. 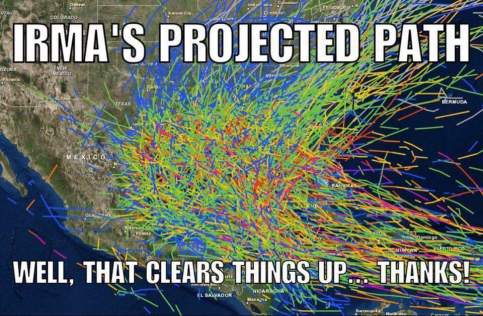 Enter Hurricane Irma. This powerful hurricane in east of the Virgin Islands. Right now the forecast is still uncertain, but right now it is a Category 5 hurricane and is moving westward. The fake forecasts, panic inciting articles, and fear mongering surrounding this storm is baffling and again very dangerous. When the storm was still over 10 days away from potentially making landfall in the US, the fear mongering and false information spreading started. Practically every person on Facebook instantly became an armchair hurricane forecaster, using their own predictions and spreading them around like wildfire. While some misinformation by individuals is to be expected, the media should know better. Here are a few examples of some of these fake news stories.

This first article claims that Hurricane Irma could be the first Category 6 Hurricane on record and potentially have the strength to be able to “wipe entire cities from existence.” This is fear mongering and panic spreading at its finest. First of all, there is not and never will there likely ever be a Category 6, as the Saffir Simpson Scale caps out at Category 5. Even the most aggressive models are calling for winds near 188 Miles Per hour. While this is extremely powerful, it is not even close to being the strongest. The strongest Hurricane in history was Hurricane Patricia in 2015. Hurricane Patricia hit Mexico as a strong Category 5 hurricane and caused mass devastation. Peak winds for this storm were at an astounding 215 Miles Per Hour.

The next article I found claimed that Hurricane Irma was going to hit the United States with maximum sustained winds of 188 Miles Per Hour. Granted, there was a tropical cyclone model that showed this, the forecast was for over 10 days out, which is Extremely inaccurate. This is yet another prime example of dangerous misinformation and inciting mass panic.

While Hurricane Irma is a powerful storm and could make a US landfall, panic and misinformation is not what we need, especially since we are not within the window for a reliable forecast. For Example, 2 days ago, it looked like Hurricane Irma might hit somewhere between Savannah, Georgia and Cape Hatteras, North Carolina. Now, the latest model data suggests a landfall over Florida. Data will continue to become more and more accurate the closer we get to a potential landfall.

With it is important to get the most accurate information. This information can be found at National Hurricane Center’s website. This is where all the official forecasts, warnings, and data can be found. There are SOME reliable sources out there, but it is always safe to go with the official data. Another good source is the Weather Channel. They get most of their data from the National Hurricane Center.

In the end, with a natural disaster of this magnitude misinformation, fake forecasts, inciting panic, and fear mongering could potentially cost lives. Always be prepared for a potential hurricane throughout the year, not just when a storm is barreling down on you. This will save a lot of heartache and panic.