This is not just an American phenomenon though.  It has a long history in European and global politics.  Recent examples might be more illustrative however.  For example, last June when Britain (and really it was primarily rural Britain) voted to leave the EU, the divide between urban and rural was apparent.  London voted 60 percent to remain but the rest of England voted 57 percent to leave.  This occurred even as Scottish voters overwhelmingly cast ballots to remain.

In America, the divide was similar last November.  The East Coast (minus Maine) and Pacific Coast (minus a couple counties in Oregon and the state of Alaska) voted for Clinton by a huge margin, 58-35 percent to be exact.  But, in the geographic heartland, (including some blue states like Illinois), casting 69 percent of all ballots cast, supported Trump 51-43 percent.

The urban/rural divide was stark this cycle.  Never before has such a divergence in voting preferences been seen.  The largest metros in the country (NYC, LA, San Fran, Washington D.C, Boston, etc.) backed Clinton by a massive 65-29 percent.  The rest of the country, including the suburbs, backed Trump 49-45 percent.

You could even break this down geographically by state.  California gave Clinton a four million plus vote edge.  She won the popular vote by just a tad over 2.8 million votes.  That means outside of California alone, one of the most urbanized states in the country, Trump won everywhere else by 1.2 million votes.

Brexit is not the only recent example we have of this divide scrambling foreign politics.  Last week, Marine Le Pen scrambled French politics when she advanced to the Presidential runoff in a hard fought election.  She did this not by winning urban Paris, finishing fourth with 11 percent, or the 13 other largest cities in France with 15 percent, but by running first in the rest of France with 25 percent.  Such a showing is the best ever for the increasingly rural and downscale National Front. 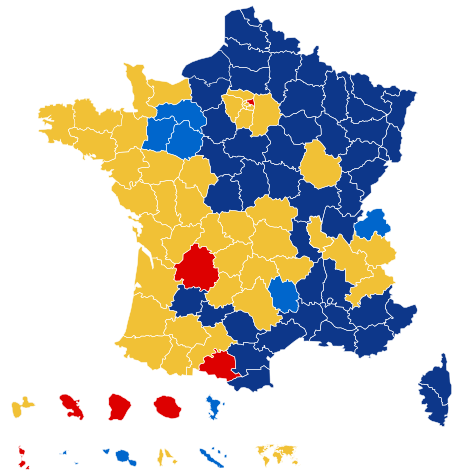 There is ample precedent for this divide.  Rural Europe revolted against the rule of Monarchs in Paris, London and the Vatican multiple times over the years.  The French Revolution was partly fought on the grounds the countryside paid taxes and fought the wars while Paris did nothing but eat and drink.  The Scots revolted against William Longshanks once it become clear they were being taxed into oblivion and oppressed.

In the more modern centuries revolts against the elite, be it in France, England or here at home, have culminated in populist uprisings whereby the majority attempt to “pare down the parasitic fringe” of central government and sought to “protect industry,” “rationalize finance” and “reduce the hatcheries which turned out the superfluous bureaucrats.”  In other words, the urban/rural divide.

Similar impulses are at work in many nations today.  In different ways and by different means, Trump, Brexit and Le Pen are many voter’s ways of countering the urban, elitist, university trained bureaucratic/financial elites of urban locales.  Many in the countryside resent the high salaries of bureaucrats that do little for them, tell them what is culturally appropriate and cast down mandates for all to obey.  Even in American and French unions today, the rank and file, formerly die-hard leftists, have turned away from their leadership because even they can no longer deny the undeniable.

It is not difficult to think of prominent issues that highlight this divide.  One of these issues that reflects both the elitist mindset and ignorance of policy impacts on rural/industrial heavily locales is global warming.  Those who dare to question the “religion” of global warming are labeled “deniers or “heretics” who must be shunned.  In academia these individuals are vilified.  To urban elitists the science is settled all the while ostracizing their peers who dare to question the “faith.”  Funny, that’s what they said to those who believed the Earth was round, not flat.

In America, speech codes on college campuses attempting to protect “feelings” are prevalent.  Of course, this does not extend to conservatives who wish to speak at these campuses.  Their feelings are immaterial.  The individuals who riot and protest such events, causing damage and vilifying others ideas and “feelings” get off scott free.

Then there is the impact of trade and globalization.  Urban elites who benefit from these things culturally and economically ignore the damaging effects they have on the countryside.  They are thus genuinely shocked when the countryside votes against more free trade, high paying jobs (if you can get into college) and cultural togetherness.

The urban locales, the capitals, the city-states, have certain advantages in this fight.  They have huge population and thus voting bases.  Their denizens are well off, ethnically diverse and college educated.  The media is monopolized within their boundaries.

But, the countryside has its advantages too.  Like urban voters, they have banded together to resist the tyranny from elites.  Electoral systems such as single member districts, the Electoral College and parliamentary systems that allocate legislative seats based on a vote threshold also help.  If you know the system you can game it (just ask Trump or Le Pen).

Of course, elections are won and lost on the strength of the candidates that run and sometimes the countryside puts its faith in flawed leadership.  Take France’s Le Pen who for all her efforts to rebrand the National Front still has an image problem as anti Jewish and anti-women.  She’ll probably lose and lose badly May 7th (though it probably won’t matter much come June).  Other times rural voters actually pick a winner.  Theresa May is set to score a big victory on June 8th in the UK after calling a snap election.  Donald Trump and his team gambled the Rust Belt and rural landscape of America was where a victory could be realized.  They were right!

The conflict between urban and rural is certain to go on for decades to come.  At times one side or the other will gain the upper hand.  History will continue to record the divide and mark its highs and lows.

I am 31 year old male who currently resides in Boise, Idaho. I consider myself a stanch fiscal conservative and moderate on social issues. My major at Boise State University was political science and politics has always interested me. I am worried about the path this country is travelling and that neither the president or his party seems to want to do anything about it. View all posts by Gabe Iacoboni