Amid the Democrats distraught and Republicans joy over the election is a hidden message that whispers, “Adapt or die.”  Donald Trump’s election may have represented a tectonic shift in the politics of the nation, eliminating long-time political topography, but both parties still face questions and challenges going forward.

If Democrats have learned anything from 2016 it is that their message is too urban and too elitist.  They’ve become the party of the 18 largest cities in America (all which Clinton carried by large margins).  They have expanded into the dense, diverse and inner suburbs of many of these cities.  But their votes are still consolidated largely in deeply blue states while being outweighed in many swing, purple states.

Still riding high the GOP’s victory did not come without clear warning sign.  GOP shares at the Presidential level hit rock bottom in many locales.  If not for Trump’s margins in rural areas the party would be preparing for President Clinton and Majority Leader Chuck Schumer.

In short, both parties shed parts of their bases this cycle.  Democrats lost the white working class in unprecedented fashion while the GOP saw a significant share of its suburban, educated vote go to Clinton.  Analysts looking forward to 2020 should be asking whether it will be easier for Democrats to win back some of the white, working class or whether Trump can placate some of his lost, affluent Republican support.

Republicans Finally Break Through the Midwest

Clinton’s significant weakness among Rustbelt voters should not come as a huge shock.  It largely represents a decades long schism between the Democratic party and their ancestral supporters.  Until recently, the party could afford to lose some of these voters if they held their margins in urban areas.  But, the party could not come close to winning when they lose close to 70 percent of this voting bloc in swing states nationwide.

Outside Wayne County, Clinton got Barack Obama-esque vote totals in big cities.  Milwaukee, Cleveland and Philly all gave her significant margins.  In Philly and its suburbs alone, she garnered 67,000 more votes than Obama in 2012.

Where she fell short and Trump gained were in dozens of rural, small counties across the region.  These counties include Ashtabula County, Ohio. The mid-sized industrial county, sitting nestled along Lake Erie gave Hillary Clinton just 38 percent of its votes.  Obama won 55 percent of the county’s support in 2012.  As far back as 1988 the county gave Dukakis 53 percent.  Trumbull County, Ohio gave Trump 50 percent and its support.  Clinton was 16 percent behind Obama’s 2012 margin and the first Democrat since Mondale to lose the county.

All along the Mississippi River, into Wisconsin, Iowa and Ohio, counties that had backed Obama four years earlier flipped to Trump.  Kenosha County, to name one-such county, a had not voted Republican at the top of the ticket since the 80’s, flipped to Trump.

In Pennsylvania, Trump won 58 percent of the vote in Luzerne County.  No Republican had done so well in the county since Richard Nixon.  Four years earlier Obama carried 51 percent of the vote.  In Erie County, Obama won 57 percent in 2012.  Trump eked out a narrow 49 percent plurality.

It was not all rosy for the GOP.  Hidden in the glow of Trump’s victory, or perhaps driven by it, was a shift in the other direction.  Republican leaning suburbs, long a base of the party, abandoned it in droves.  In Wisconsin, Trump won by over 20,000 votes.  However, he garnered far fewer votes in suburban Waukesha and urban Milwaukee counties than Romney.  In Pennsylvania, a state Trump carried by less than a point, he fell behind by 67,000 more votes than Romney did Obama in Southeastern Pennsylvania.

Trump’s ability to woo back these voters could determine whether the GOP will have to endure a new, party-wide schism or whether it was more Trump’s temperament and style that temporarily drove away these voters.

A recently concluded study of 20 high growth, GOP leaning suburban counties in the US showed Romney garnered a 753,442 vote advantage over Obama in these counties.  Trump, in contrast, only edged Clinton by 467,120 votes (you can see the full results in the table below). 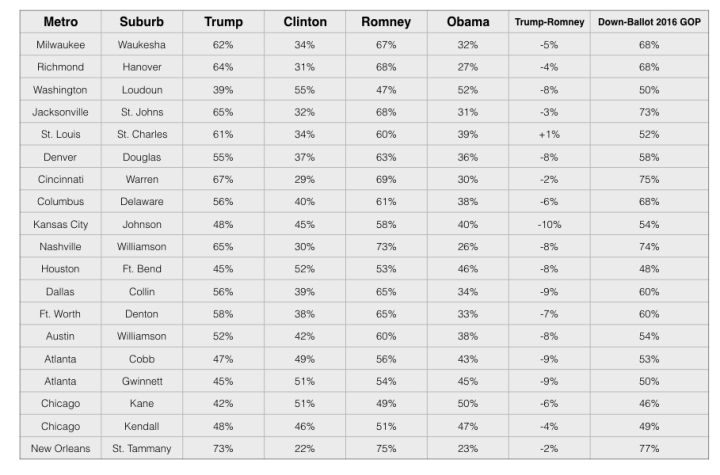 In every single county, minus St. Charles, Trump performed worse than Romney.  In some cases the numbers are not significant or did not change the outcome (ie. St. Tammany, LA or Warren County, OH).  But in others, Loudoun County, VA or Cobb County, GA, the differences were significant.

These counties are admittedly drastically different.  Virginia’s and Atlanta’s suburbs are increasingly diverse which has likely driven down GOP margins.  But, in even heavily white suburban counties Trump’s margins should be a warning sign to the party they need to bridge some of their divisions before Democrats take advantage of them.

The good news for Republicans is that these counties voters still seem to like down-ballot Republicans.  They elected a resounding number of state legislators and Congressional members even as they were voting for Clinton or tepidly supporting Trump.

These counties are all highly educated and high income.  The 20 counties median income is a stout $75,634.  That is a whopping 41 percent higher than the national average.  Now, add to this that these are where the party’s intellectual class comes from.  Speaker Paul Ryan sits in a district nestled in Waukesha.  Former RNC Chair and Trump Chief of Staff Reince Priebus calls the area home.  Kane and Kendell Counties in Illinois gave us Dennis Hastert.  Tom Delay honed his skills in Fort Worth and Newt Gingrich was first elected in Cobb County.

Historically, the successful GOP Presidential campaign has been built on the idea of small “C” capitalism.  This ideology married small businesses and affluent, suburban voters to the GOP’s economic platform.  It also tended to downplay the tensions between social conservatives and the business wing of the party.  It was a coherent, philosophy that played well with various segments of the public nationally.

Trump obviously went his own way with his campaign and it showed with tanking numbers in traditionally GOP suburbs.  But, again, down-ballot Republicans were able to significantly outrun their nominee.  At last count, Republicans are set to win the national House vote by over 1.5 million.  This result stands in contrast to Clinton winning the popular vote by just under 2.9 million.

Nowhere was this more apparent than Loudoun, VA, Waukesha, WI and Bucks, PA.  Barbara Comstock (R-VA) won reelection in her district nestled in Loudoun.  Clinton carried the county by 16 percent and Comstock’s district by 10 percent.

Suburban Waukesha and Bucks have anchored statewide Republican campaigns in Pennsylvania and Wisconsin.  In Bucks, Senator Pat Toomey outran Trump by 11,000 votes.  He repeated this feat in other suburban counties as well and ended up winning his race by almost 2 percent.  In Waukesha, Senator Ron Johnson outperformed Trump by almost 20,000 votes.  He exceeded Trump’s winning margin in the state by over 74,000 votes (despite lower turnout in the down-ballot contest).

Democrats alone spent $9 million in Comstock’s contest (the most expensive in the nation).  In Pennsylvania and Wisconsin, Democrats outspent GOP candidacies and outside groups by over 2-1.  It didn’t matter.  The suburban base of the party stuck with the GOP.  At least for this go-round.

Both Republicans and Democrats Have Work To Do

The question for both Republicans and Democrats is where do they go from here?  How do Republicans maintain the loyalty of their fiscally conservative, suburban base while maximizing turnout among Trump’s populist, voting bloc?

This path seems easier than Democrats path back to power.  A little over eight years after Obama derisively said rural Americans were “bitter” and “clinging to their guns and religion.”  This arguably started a chain-reaction that led to the GOP midterm waves in 2010 and 2014.  Republicans established locks on Governorships and state legislatures and gained their second largest Congressional majority since 1928.

This year, Hillary Clinton’s “deplorables” comment had a similar theme to it.  These voters, loyal Democratic backers for decades, were left with no other conclusion other than their party did not like them anymore and just wanted their votes.

To make inroads into now GOP territory, Democrats cannot merely turn out their urban base.  They have to either convince right leaning suburban voters their interests now lie with the party of more government and social acceptance or woo back down-scale whites.

For their part, Republicans and Trump need to assuage the concerns of suburban voters that Trump is not a hot-head and his populist tendencies are more moderate in nature.  If Trump is serious about working with Democrats it might nullify the worry of suburban Republicans and Independents alike as things get done and legislation is passed.

Both parties face significant challenges.  Whichever party handles their challenges best is sure to benefit in 2018 and beyond.

3 thoughts on “Both Republicans and Democrats Face Difficult Choices Ahead”

I am 31 year old male who currently resides in Boise, Idaho. I consider myself a stanch fiscal conservative and moderate on social issues. My major at Boise State University was political science and politics has always interested me. I am worried about the path this country is travelling and that neither the president or his party seems to want to do anything about it. View all posts by Gabe Iacoboni